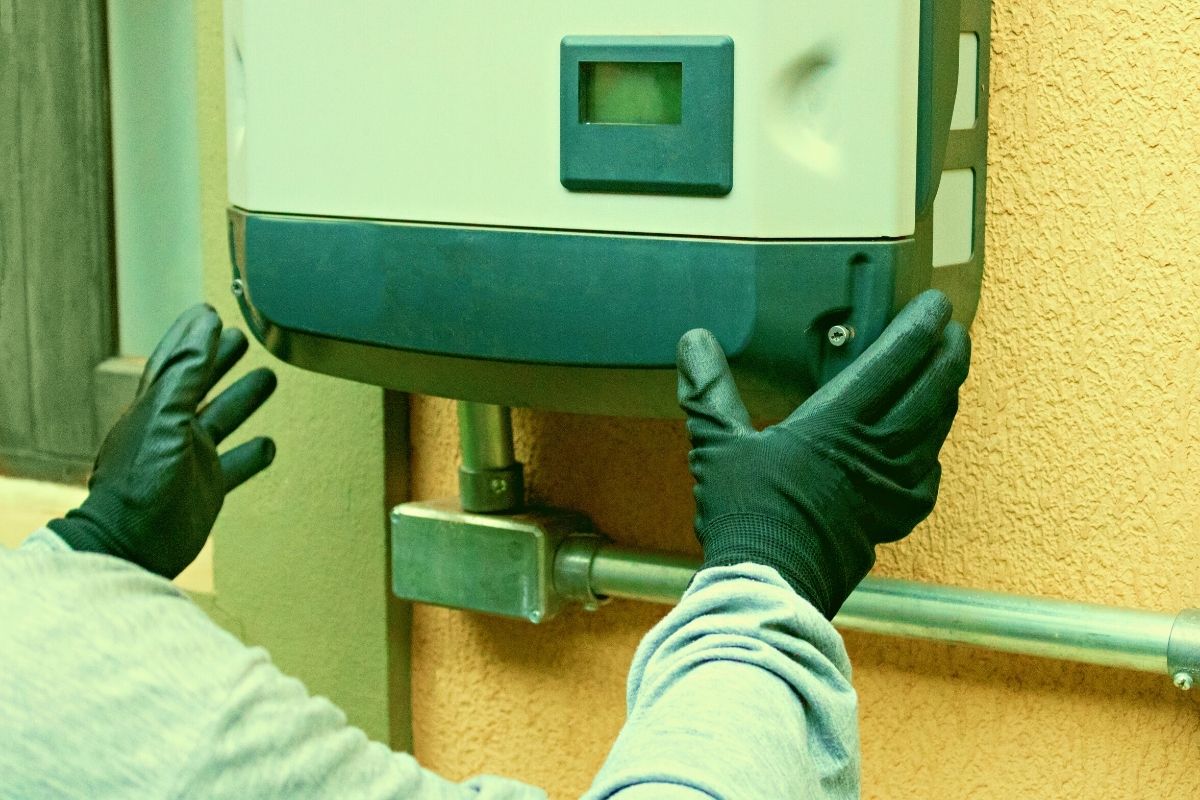 It is no surprise that the top electric vehicle manufacturer in the world is also one of the top renewable energy industries in the US. Fact is, the solar and storage business is a vital aspect of Tesla’s future growth plans.

When you consider a solar system installation, the inverter is the most sophisticated part of the entire system. That means choosing a quality product is a must.

Elon Musk also has already stated his plans to accelerate the growth of Tesla’s solar and energy storage business in the coming years. So, the launch of the Tesla solar inverter as an integral part of the Tesla home solar system was an expected step from the brand.

What exactly are the features of the Tesla solar inverter and how good is it?

Let us look into the details and find out.

What Is a Solar Inverter?

Perhaps you are not familiar with the concept of a solar inverter.

In fact, before I started investigating solar panels for my own home, I had zero knowledge of them either.

There are two integral parts of a solar energy system- solar panels and a solar inverter. A storage battery may or may not be a part of the system.

The solar panels capture the solar energy and use the photovoltaic cells to convert it into electricity. However, this is a direct current and most home appliances run on an alternating current.

The solar inverter converts this direct current from the panels into alternating current by passing it through a transformer.

Other than that the inverter also acts as the brain of the entire system. It tracks the solar system’s power production and helps in maximizing the output. The inverter also ensures that the system functions in a safe manner.

Generally, there are 5 different types of solar inverters. The string inverter is the most popular choice for residential systems. They offer good durability and come with a low price tag.

Before launching its own inverters, Tesla was using SolarEdge and Delta inverters with its solar installations. The inverter was the only key element of a solar installation package that they were not manufacturing. Now they have a complete energy package to offer to the customers.

Generally, using devices from a single vendor provides better system efficiency and software optimization. With an in-house product, Tesla also gets more control over the supply chain and cost structure of its solar energy packages.

This seems in line with Tesla’s target of providing the cheapest solar energy package for residential users. With every stage of the process- from manufacturing solar cells to the installation of the system- under its umbrella, Tesla will be able to drive the costs down even further.

That said, if you are expecting some groundbreaking innovations from Tesla in this product, you might be disappointed.

In terms of features and performance, the device is on par with the market leaders. Even though Tesla has incorporated some great features there is nothing new about the basic design of this inverter

Note, Tesla already has the Powerwall, which is a battery system that can be integrated with solar panels. The Powerwall comes with a Tesla solar inverter for converting the current.

Basically, the system consists of a mounted inverter box that groups the solar panels into a series circuit or multiple “strings”. Multiple strings are then connected to a single inverter that converts the direct current (DC) into alternating current (AC).

The advantage of the string design is the ease of installation and lower costs. The wiring through the roof is also less complicated and lower connection points make the system safer..

One downside of the string system is the series connectivity. If one of the panels is shaded or damaged, it produces at a lower capacity and affects all the other panels across the string.

Also, panel-level optimization is not possible with this design. Such optimization would have boosted the performance even more.

Tesla offers the inverter in 3.8 kW and 7.6 kW models.  The 3.8 kW unit is for smaller solar units and the 7.6 kW is for medium-sized units. However, you can stack multiple inverters together to meet the combined output of larger installations.

Note, Tesla does not offer customized solar power systems. So, you get small, medium and large size systems depending on your energy consumption.

Tesla mentions that the design of the inverter ensures high efficiency and reliability.  To ensure that the solar panels deliver the best output, the inverter contains more MPPTs (Maximum Power Point Tracking).

Basically, each solar panel has a Maximum Power Point (MPP), when it delivers the maximum power. The job of the MPPT is to keep the output of the solar always at the MPP. Each string will have an MPPT to ensure the best performance of the panels.

The 7.6 kW unit has 4 MPPTs built into it. This is a unique feature as most inverters in this category come with 2 MPPTs. This also gives you additional flexibility with larger installations- especially while installing a solar roof.

The inverters also have a current rating of 13A. This makes them a good option for pairing up with high capacity solar panels with outputs of 400W to 500W.

Interestingly, Tesla has published only selected data about the inverter on its website. Here are some other features of the inverter that Tesla has mentioned.

In terms of efficiency, the inverters are on par with the competition. However, the best efficiency for solar inverters in the market is 99%, which is provided by SolarEdge.

Other than that the Tesla inverter also has the necessary safety features. These include arc fault protection, ground fault protection, and rapid shutdown in case of an emergency. The unit is also designed as per the North American safety and EMI standards.

The Tesla solar inverter app or the Tesla app provides a comprehensive view of your solar power system and also helps in real-time system monitoring. All the devices in the system, including the inverter, will be connected to the app.

That way, you get a seamless interface between the performance of the solar panels, inverter operation, and energy storage. The interface is easy to use and it also allows Powerwall owners to customize the system based on the user preferences.

It is well known that Tesla provides periodic updates for its products over WiFi or through the app. So you can expect updates for the inverter software in the future.

Tesla is providing a longer warranty on the inverter than its competitors. The standard warranty in the market is for ten years, but Tesla has extended it to 12.5 years. Still, it is not the highest in the market.

The Tesla solar panels are covered by a 25-year warranty. So the warranty on the Tesla inverter is exactly half of that period.

Keep in mind that the entire Tesla solar system is covered by a comprehensive warranty of 10 years.

That said, Tesla’s customer service has earned some bad reviews in the past years. Perhaps you can take the feedback from existing customers in your area to find out more about the Tesla solar inverter warranty service

Since Tesla plans to bring the costs further down, we can be sure that the Tesla solar inverter costs will be competitive.

In general, the prices of the complete Tesla solar systems will vary based on the size and the available tax incentives. In 2021, the average cost of residential solar installations in the US was $3.28 per watt. With Tesla solar, the cost of the smallest option will be around  $3.18 per watt, including a Powerwall. Costs for larger units were less.

While Tesla does not offer solar leases, you can opt for a solar loan through the company. Also, Tesla has mentioned that it will match the price of any solar installer who quotes a lower price

At this stage, the overall performance data from Tesla inverters is limited. That makes it difficult to comment on the long-term performance of the device and its overall impact on the market.

Should you buy the Tesla solar inverter?

In the end, it all boils down to your preferences.

If you are looking for a cheap and reliable solar option, The Tesla inverter is a good choice. Also, tesla installations have a clean look that makes them stand out from the competition.

However, if you want a customized design and a premium category inverter, there are better options in the market.

The only way to find out if the Tesla inverter is available in your area is to check their website.

What inverters does Tesla use for solar?

Before manufacturing their own inverters, Tesla used inverters from third parties like SolarEdge and Delta. Presently, they are manufacturing all components of the solar power system in-house.

How does the Tesla solar inverter work?

Tesla solar inverters work on string technology. Each inverter is connected to a string of solar panels and converts the electricity generated by the panels from DC to AC.

Which solar inverter is best?

In the past few years, solar inverters from brands like Fronius, SMA, and SolarEdge have emerged as the top products in terms of quality and performance.